Add To Cart For Price

(No reviews yet) Write a Review 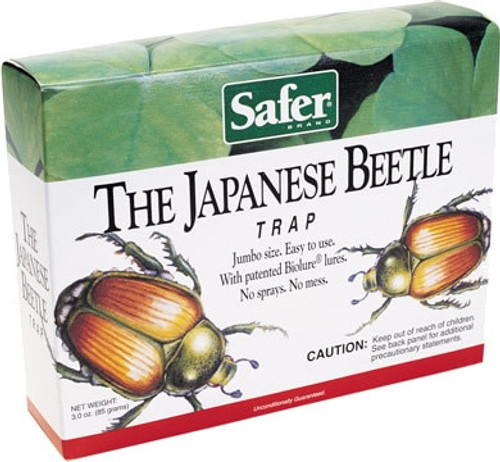 The Safer® Brand Japanese Beetle Trap uses a food and sex attractant to lure insects into the trap and disrupts the mating cycle. A controlled release system, maximizes the life of the attractant and protects the attractant from environmental degradation.

Place this natural pest control trap at least 10 feet away from plantings to prevent defoliation.

Place traps as beetles emerge in:

Place traps on the generally upwind side of vegetable gardens, flower gardens, ornamental shrub planting and other outside landscape planting attached by the beetles. Apply traps at the rate of one trap per 50 linear feet along two sides of plant perimeters. Place traps at least 10 feet away from the planting as they may attract beetles to foliage if placed closer

Replace bags when full. If trap catches decline and beetles are still present, replace bait pack. Remove traps from site when beetles are no longer present.

Selection of the store only applies in the cart/checkout.